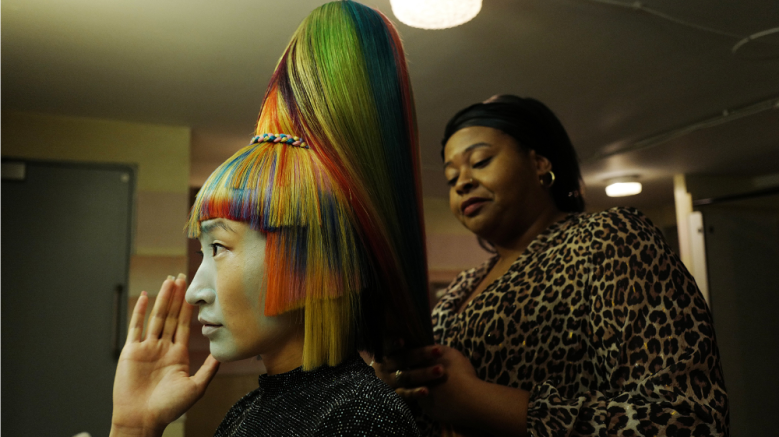 Elaborate braids, teased curls, and brightly colored dye all mix together at the hands of talented hairstylists prepping their models for an annual hair competition. Similar to the beautiful intricacies of hair styling, writer/director Thomas Hardiman weaves through an intriguing murder mystery with the audience at his mercy. An arresting and visually stunning achievement, “Medusa Deluxe” breaks the framework on storytelling and sheds the skin of a subculture in the process.

Confident and accomplished Cleve (powerfully played by Clare Perkins) is attempting to style the baroque Georgian Fontange on her model as she speculates about the horrific events of the evening with her religious rival Divine (Kayla Meikle). A stylist named Mosca has been found dead and scalped on the premises. Stressed, terrified, and suspicious, the group of stylists and their models at the competition intimately discuss who the killer could be and if the competition is rigged as they wait to be interviewed by the police.

Hardiman creates a cast of characters with a bold vision. A rival stylist named Rene (Darrell D’Silva) is the one to deliver the news of Mosca’s passing to his distraught husband Angel (Luke Pasqualino) while the models and stylists grow increasingly suspicious of a strange security guard by the name of Gac (Heider Ali).

While each actor delivers a strong performance with a seeming amount of ease, the minimal time spent with each one results in a lack of emotional connection and depth. Despite one of their colleagues dying, there is not a strong enough pull for the audience to become emotionally invested to really care. However, looking at the group collectively, the film attempts to analyze what happens on a single night within a professional community that is broken and attempts to come together again after a tragedy.

“Medusa Deluxe” primarily excels with its technical delivery and aesthetic. Gossip is spread from room to room of the competition arena by the camera following behind characters through winding corridors and stairways. Hardiman shoots each character up close in a 4:3 aspect ratio, and the steady cam movements from Jake Whitehouse are spectacular. Fouad Gaber’s sleek editing allows audiences to smoothly glide along with the characters as the story of Mosca’s death begins to unravel.

Gaber is also able to experimentally edit a time jump in a manner that melts on camera, almost tricking audiences because of its efficiency. Watching the camera work in this film is a marvel in and of itself. One single shot sequence lasts over forty minutes long and speaks to the kind of intricate cadence the film possesses. Cinematographer Robbie Ryan also beautifully balances the dark and gritty nature of a competitive subculture with the colorful production design from Gary Williamson. Every technical art form is on full display and deserves ample praise.

Hardiman visually pushes the structure of storytelling just like its renowned hair stylist on-set, Eugene Souleiman, pushes the limits with hairdressing. Souleiman’s creations dazzle and the hairstyles that each model dons appear lifted right out of a glossy high-fashion magazine. He is able to play with light, structure, texture, and length that perfectly compliments Hardiman’s shooting and writing style.

“Medusa Deluxe” is a flamboyant and alluring film that leaves audiences guessing until the very end about not only who committed the heinous crime but how exactly Hardiman was able to pull off such a visually delightful feature debut.

“Medusa Deluxe” premiered at the 2022 Fantastic Fest. It is currently seeking U.S. distribution.

Sign Up: Stay on top of the latest breaking film and TV news! Sign up for our Email Newsletters here. 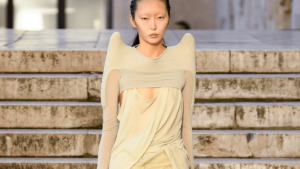 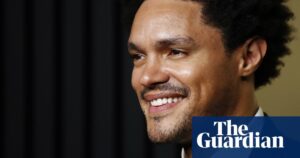 Next post Trevor Noah to leave The Daily Show, saying he wants to do more standup
William